Ingram
Having lived in Connecticut for nearly twenty years, I still seem to be considered a "West coast" composer.This is ok by me as I think my creative composing "head" functions best in that imaginary geography, and I do spend time every summer in the Sierras in my little "hauschen" (ie cabin).If I get out there in the Spring, there's often morels to be found, and if so, I find them. See my website for biographical details. WWW.Ingrammarshall.com 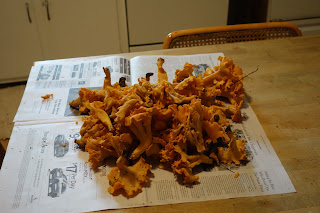 Readers of this blog will know that I have not been filled with esperance when it comes to the state of mushroom foraging of late Well, I am glad to report that the situation has greatly improved! Several days ago I went to check one of my "hot spots" where I used to find decent flowerings of chanterelles.But it has been a barren fungal landscape for the last three years or so. Not only was there a respectablet florescence, it was actually over whelming. I filled up a sack and lugged it home, feeling downright greedy. At my feet wee nice fat fresh golden chants,  coveirng the forest floor.
We feasted for several days and froze the rest. Just like in the old days, even better actually.
I got to thinking that there was a kind of an analogue between the mushroom  scene and the state of  my compositional life.
But dare I venture into  such shaky speculation?.
Why not be a little confessional. If I think of the minor finds here and there of morels, chantrelles and other edibles (mostly boletes in the Sierras) scattered over the last few years I am reminded of the similarly minor little commisons that have come my way of late. There has been nothing of substance, just a few chamber and solo pieces." Frankly, it's kind of depressing not to have a major work under way on the drafting table . But I take hope now with this trove of canterellus as a kind of harbinger of things to come, a big project waiting in the proberbial "woods" whhch will fill my days with engaged compositional wonderment and zeal.
Now that is esperance, the golden kind.
Posted by Ingram at 5:36 PM